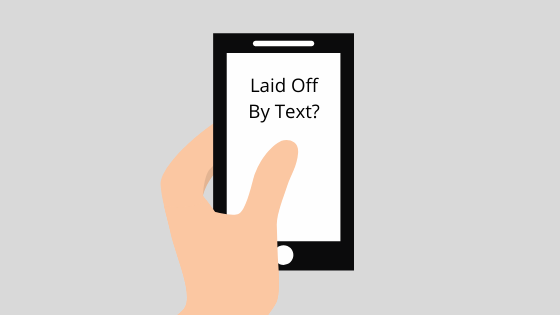 With layoffs becoming regular daily events in this new Covid-19 labor market, stories are surfacing about people getting the news via text message. On one hand that’s not surprising given the pervasiveness of texting as a communication tool. On the other hand, employers must balance efficiency against the need for compassion and delicacy when delivering difficult news in difficult times.

One story involves a popular New York City fast casual chain. The article states, “on the heels of mass quarantines, a market crash, and a reeling restaurant industry — an estimated 40% of [the] 100-person corporate workforce was laid off across the Manhattan-based company. Staffers were informed via text message. A phone call followed 15 minutes later. Employees were told about their layoffs one by one…”.

I repeated this story on an HR facebook group and I received a number of forceful responses. The sentiment was fairly one sided against the idea with comments such like this;

The article goes on to say that the company is a real-time case study in “how not to let go of talent”. I’m not so sure that’s a totally fair statement given the fact we don’t know what the initial text said. If it was just a preparatory message announcing some company news was imminent and to expect a phone call with more details I can live with that.

A few HR pros backed that sentiment up with these replies;

I tend to give Dig a little slack here given the fact that we are in the midst of a pandemic and a layoff announcement was probably not a surprise to most of their team. They probably felt like a text was the fastest most reliable way to start the process which again, was followed by a personal phone call.

As a platform, text messages are a great way to scale your communications. If you have to layoff hundreds of people at once and you can’t do it in person because we are all working remotely what’s the best medium? Email, phone, text, video?

When Ziprecruiter laid off hundreds of workers last month the CEO of the company announced the news via a Zoom video meeting. In it, he stated how much he hated having to share the news via video but he really had no other choice. In times like this, expediency is a primary focus for executives.

So if you have to layoff workers in the coming days and weeks, do so gently with a personal touch. One CEO I know said it best, ‘don't fire anyone that way, but use it to coordinate and provide information to make things less painful’. An email or text could be used to alert your workers of imminent news but deliver the bad news in person, by phone or live video to be seen as more caring.